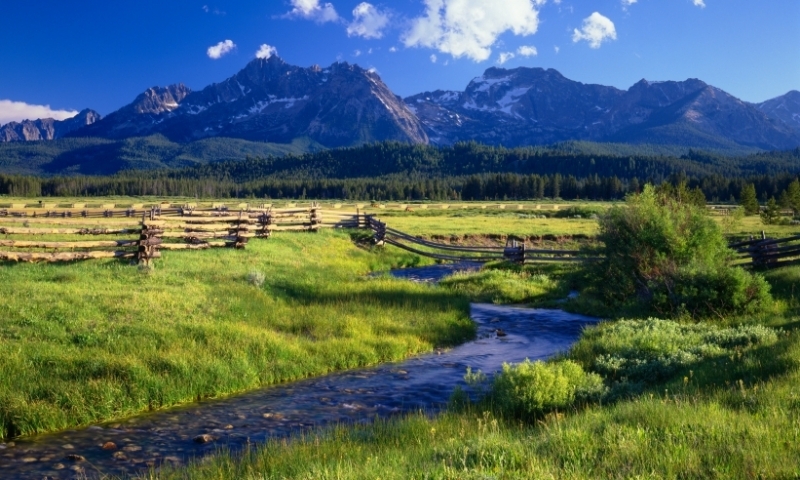 In the mere length of 115 miles, the Sawtooth Scenic Byway takes the traveler from volcanic sagebrush lands on north into awe-inspiring high snow-covered mountain peaks.

Although the Sawtooth Scenic Byway was the 100th National Forest Scenic Byway established, it has much more to offer for its "claim to fame". The southern end of the byway begins in Shoshone, Idaho and feature volcanic geological attractions as it begins its journey north. From volcanic desert land, the two-lane paved road heads north through fertile farm ground and into the resort towns of Bellevue, Hailey, Ketchum and Sun Valley. Past the residential area of the Wood River Valley, the route continues on the valley floor through the Boulder Mountains and then over the top of Galena Pass.

From the south side of Galena and then over and beyond headed north, the route travels through the Sawtooth National Recreation Area. Rimmed by the Sawtooth Mountains to the west, the area is filled with scenic wonders to include a multitude of rivers, streams and high mountain lakes.

The total distance between the southern most end and the northern most end of the Sawtooth Scenic Byway is 115 miles. The time it takes to travel the entire distance depends on how many stops you make along the way to see the many attractions located on or near the Byway.
This two-lane paved highway leads visitors through a wonderland of deep glacier formed valleys surrounded by majestic alpine peaks. Don't worry. There are plenty of scenic turnouts so you can stop and enjoy the views.

As you travel through, be aware of the wildlife, which includes deer, elk, bear and wolves. The area is their home and they may wander out in front of your vehicle. Also, be aware of others traveling on the Sawtooth Scenic Byway for the route can be busy during the summer months.

At the Junction of State Highway #75 with United States Highway #26 /93, starts Sawtooth Scenic Byway. The Sawtooth Scenic Byway takes you along the Sawtooth Mountains- the heart of the Idaho Rockies. This Byway passes through fertile agricultural land to the resort towns of Hailey, Ketchum, Sun Valley and Sawtooth National Recreation Area, where rivers, streams, and alpine lakes are abundant.

Some sights to see as you travel north along the Sawtooth Scenic Byway include:

Escape to a Perfect Cabin Getaway